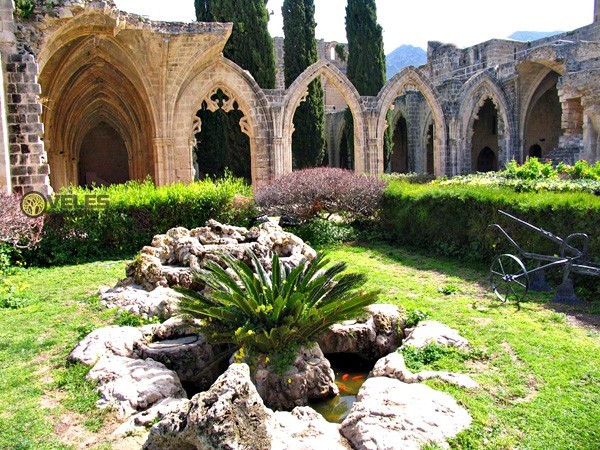 Time did not spare an abbey. But that part which survived to this day retained enduring charm. Bellapais Abbey was founded in 1200. By Ameri, first king of Cyprus from de Lusignan dynasty.

Initially, inhabitants of the abbey were Benedictine monks, and then Augustinians moved here from Palestine. They wore white cloaks and hoods, so contemporaries called Bellapais – “White Abbey”.

Prosperity of the abbey continued until unfortunate war for Cyprus with Genoese. During long siege of Kyrenia castle, Genoese completely robbed abbey and took everything that was possible out of it. Leaving the monks only clothes. So the abbey lost all relics donated by kings of Cyprus. Bellapais never recovered from this blow. During the reign of Venetians, the abbey fell into complete decline. Morals of the monks fell so much. That they openly lived in cells with their mistresses, some even containing several women. The many children of the monks filled courtyard and garden of the abbey. Constantly playing games and making an incredible noise.

The abbey has lost all authority.

There is a legend that says that once abbot discovered two monks with their mistresses in courtyard and ordered them to be punished with words: “You will be forever close, but you can never touch each other.” The monks and two women were buried in courtyard in its four corners, and four thujas were planted at place of their burial. 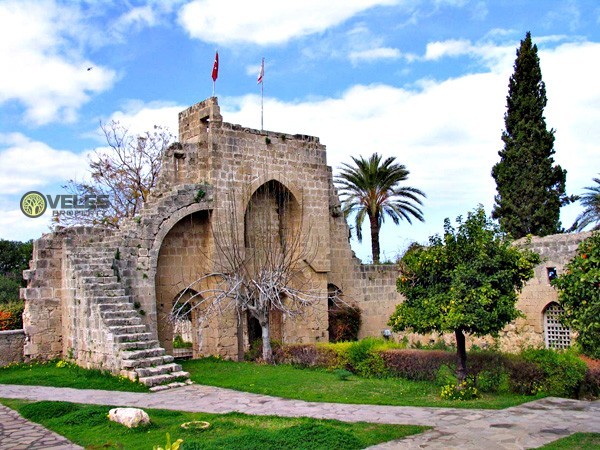 After conquest of island by Turkey, abbey was transferred to Cypriot Orthodox Church. Which had little interest in it, and its land was leased. The buildings of abbey were empty and began to collapse.

Under the Brits, arsenal of one of military units was located here. This protected abbey from total destruction. Only after II World War, when the British seriously began to study historical monuments of Cyprus. They discovered that abbey was unique architectural complex of medieval Gothic and pilgrimage of tourists began here. What survived to this day?

The 13th century church was preserved practically without damage. Where fragments of fresco painting of 17th century were preserved on walls. The church is an excellent example of Gothic French architecture. It is similar to buildings of same period in Piedmont, in south of France. 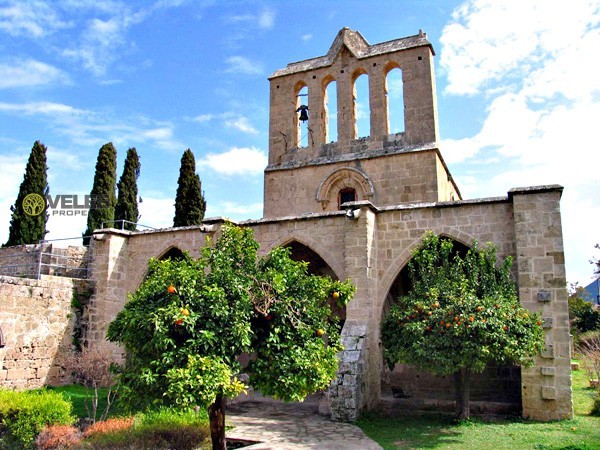 Abbey was once closed world, where people went for horseman, to serve God. It was possible to enter monastery only through the gate in outer wall (it survived), or through premises of church. The destruction of internal walls and ceilings, revealed previously closed part of abbey – clostoria. Once it was covered gallery surrounding monastery courtyard, in which flowers and decorative bushes grew. Three Gothic arches have survived on western side. Hidden by architects in depths of stone vaults. They are now naked and pierced with delicate silhouettes in blue of sky. These arches have become kind of symbol not only of Bellapais,. But of Northern Cyprus, photos of the abbey are printed on postcards, stamps and booklets. 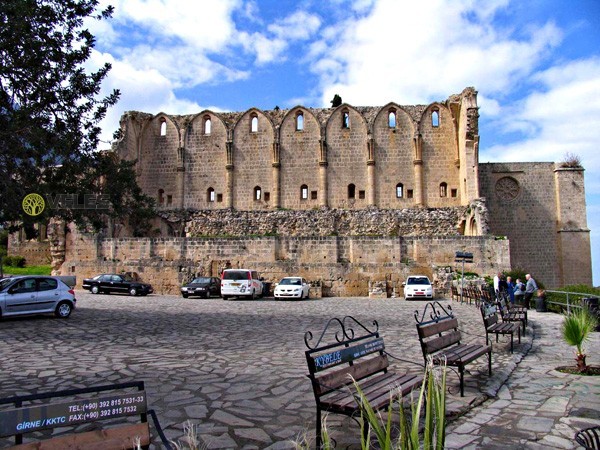 At the entrance are two Roman marble sarcophagi. They were taken by builders from the necropolis to create a kind of “washstand”.

The monks filled upper sarcophagus with water, in which several holes were drilled, from which water was washed out for washing. The used water flowed into the lower sarcophagus, falling into the irrigation system of the abbey’s courtyard. Everything was thought out, even an economical system of washing hands before eating.

28 monks cells were located on second and third floors of the abbey, east of courtyard. You can climb them on preserved stairs. The cells are almost completely destroyed. The abbot’s chambers, in which King Hugh III loved to live, were also destroyed.

Quiet, beautiful village of Bellapais is located in Kyrenia mountains 4 miles from Northern Cyprus coast. There are many interesting sights in Bellapais, such as ancient crusader paths encircling the mountains, not to mention excellent restaurants and taverns! The life of village, for most part, revolves around this ancient architectural monument, which is still used for classical music concerts and exhibitions.

After spending couple of hours exploring abbey and beautiful views, or following tracks of Richard the Lionheart along paths of crusaders, you will rest and absorb peace and tranquility that Cyprus is famous for.

Nowadays, beautiful Gothic architecture leaves no one indifferent. After visiting the abbey, you can relax on the terrace of the restaurant and enjoy a cup of Turkish coffee while admiring panorama of the coast.

The abbey is especially beautiful in the evening, when the rays of the setting sun, openwork arches gilded. Peace and tranquility encompasses you, tuning you into philosophical mood. There is no right, you start to think that heroes of the novel “Bitter Lemons” were somewhat right. Bellapais is place where there is no hurry. The Abbey is largest monumental Gothic building preserved in Cyprus. This is the first time you see the abbey – high on a plateau in the arms of the mountains. It becomes clear why the abbey was founded and called the “St. Mary’s Mountain” by hermits who left Palestine at the beginning of the 13th century.

Subscribe to our TELEGRAM and be the first to receive information about new properties, services, changes in legislation.

The beaches of North Cyprus is, firstly, a great opportunity to escape from everyday life....

Ancient Castle Vouni. Today I would like to talk with you about one of the most favorite places...